Sky passed away a few days ago. I didnt have time to blog since then.
He was a really old fish, and I found him dead while feeding his tank mates.

I thought I wasn't going to get another betta fish. I was debating it, though. I am getting a 40 gallon right out side of my room for angel fish, and I was going to upgrade Sky to a 20 gallon long in my room. I am currently looking for pieces of used furniture to refurbish into a large night stand/dresser/aquarium stand for the 20 long. I was thinking that if I don't get another betta fish, I might not have a purpose for an aquarium in my room other than maybe neon tetras, which I would have any way with my betta. I was thinking, maybe I still shouldn't get a betta. It would feel like I am trying to replace Sky, and that would be messed up. Then I realized: People keep betta fish in vases!!! If I do get a new one, that would be one more betta fish in a proper habitat and one less betta fish in a bowl/vase. That was what made me decide to get one. It would be stupid of me to let one "live" in a tiny container. So, I was at the pet store getting an albino bristle nose pleco, and I decided to take a look to see what bettas they have.
This fish is an honorable mention. He is beautiful. My mom, who was kind enough to buy both fish for me (along with 2 shirts before we went to the petstore,) showed me this guy. 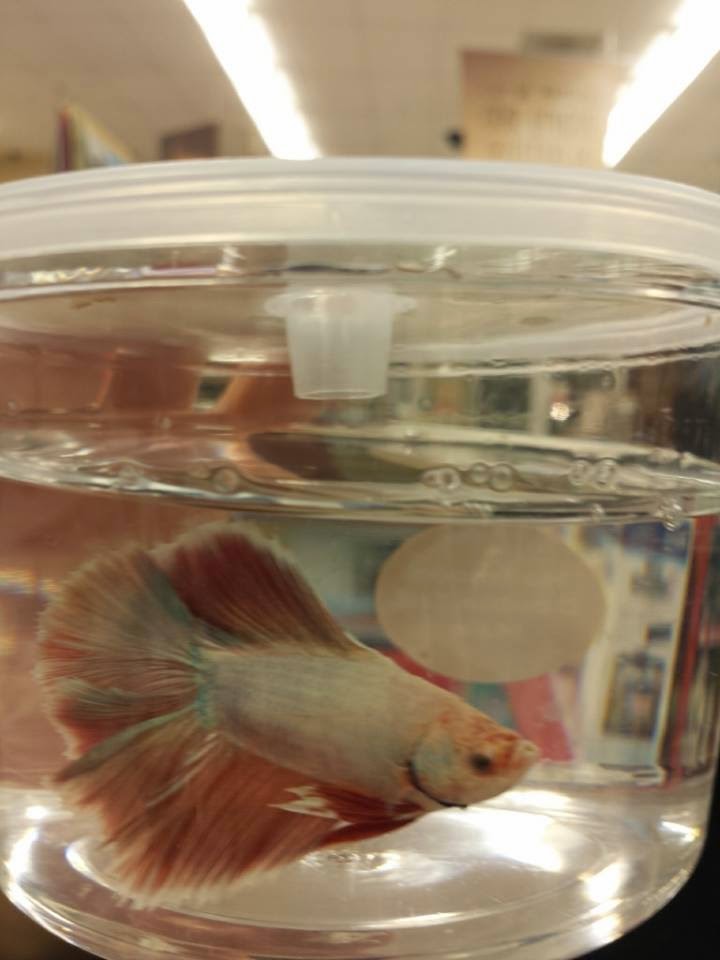 Here are the 2 I was choosing between, because they were my favorite. 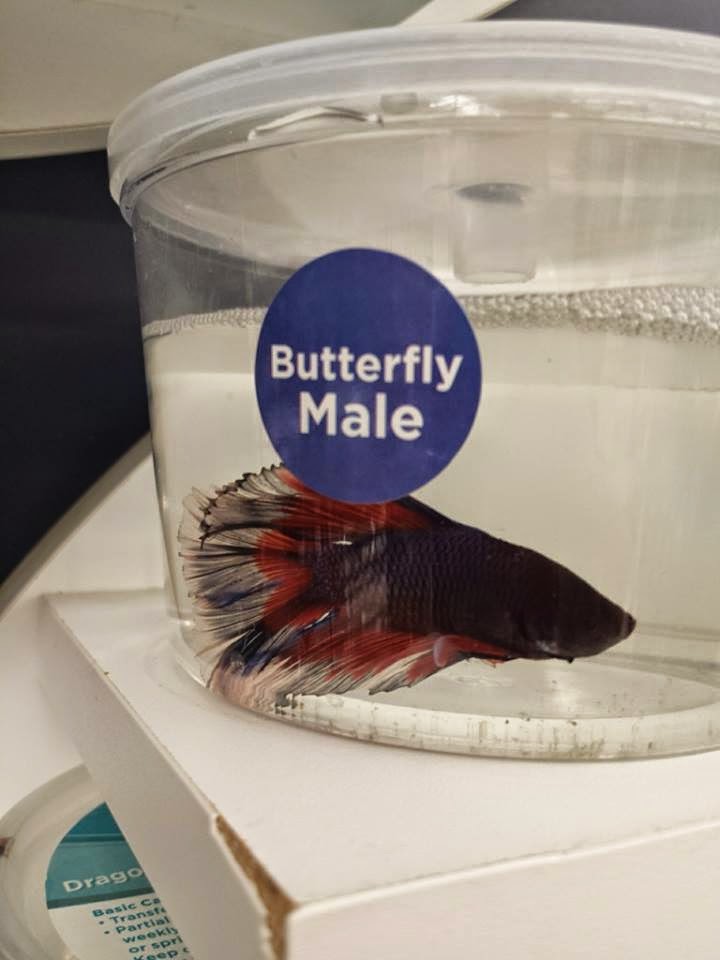 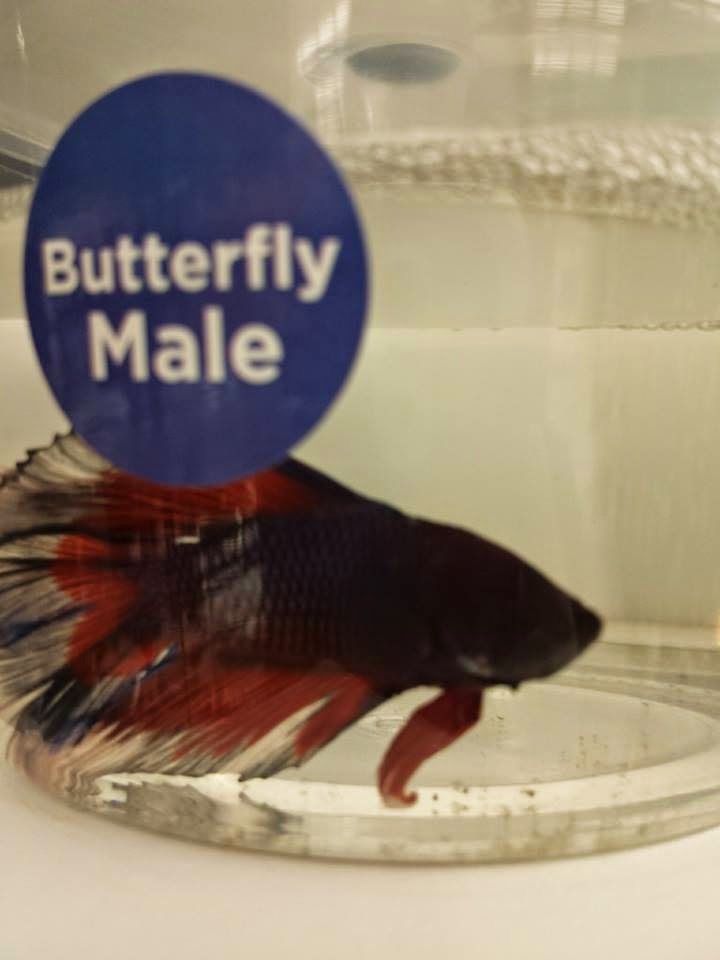 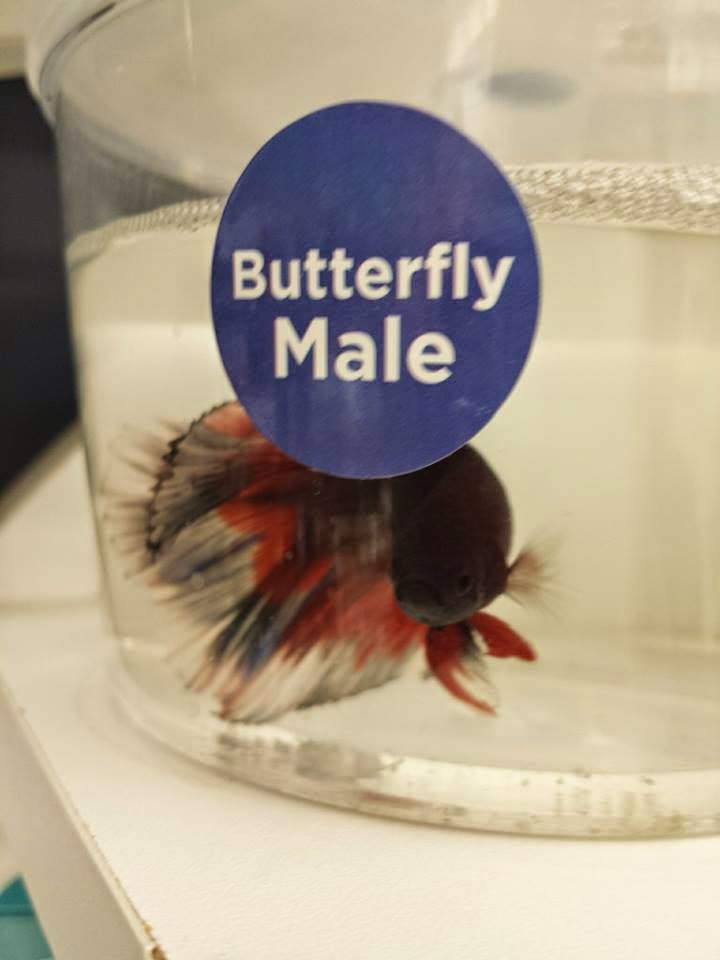 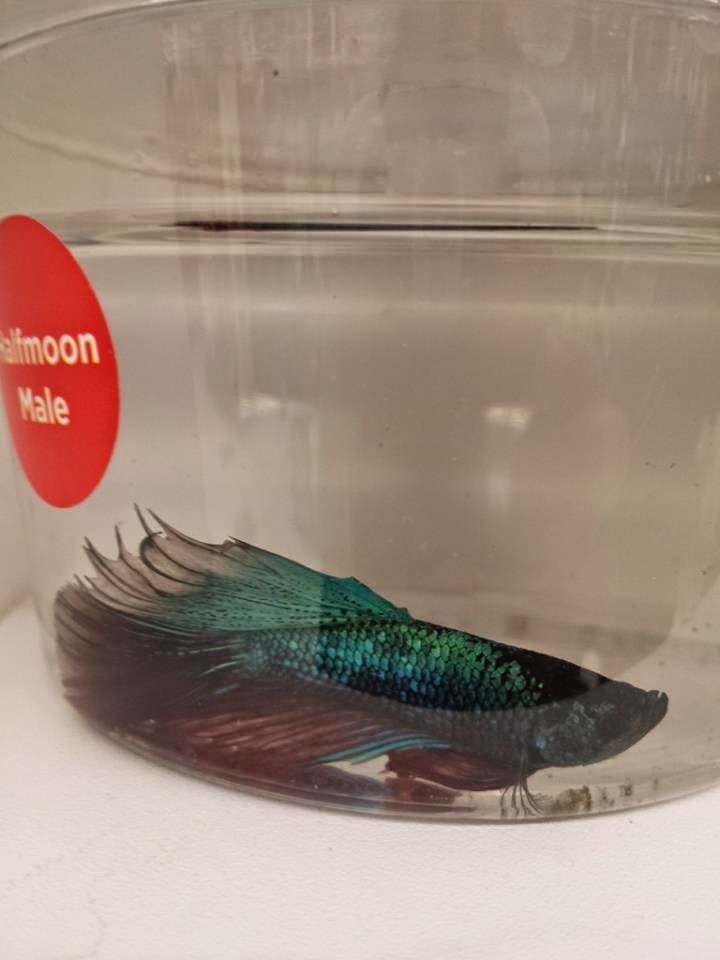 This one's cup was marked halfmoon male, but he also looks dragon scale to me. I eventually decided to get the Halfmoon betta fish, an old favorite. I really love the design on his dorsal fin.
Here is him when I first got home 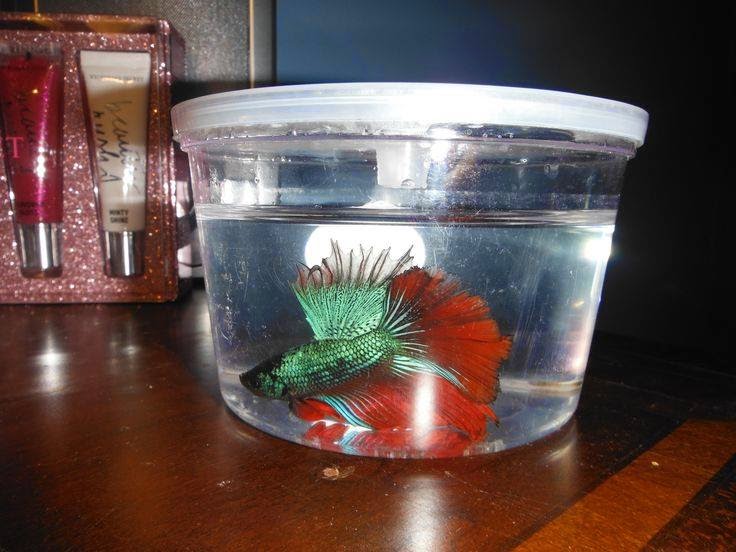 I decided to name him Trident.
Welcome home Trident the Halfmoon Male Betta Fish!!!
He really is one of a kind, I have never seen anything like him before. Right now he is in a 0.33 gallon tank. He will be in there overnight and tomorrow night or the night after that I will put him in the 10 gallon, depending on how he is.

Everybody, please please please remember that betta fish are not ornaments, but living beings. They deserve respect, heat, room, and a clean space to live in. 2.5 seems to be the bare minimal, but I do not support keeping them in anything under 5 gallons. Mine is only in a small 0.33 gallon for a short time, and it is bigger than his cup the poor thing has been having to live in. Look at that ammonia!!!
He will be in his 10 gallon soon, and sometime after that a 20 gallon!!!! Can't wait!!!!
Until next time, happy betta keeping!!!
Posted by Unknown at 10:20 PM No comments:

Best Christmas present yet and footage of a heart filled angel fish reunion!!!

When Buddy was at PetCo,, he seemed to be really good friends with another tiny angel fish, who I named Cleo. I felt bad about separating the two, and decided to go back and get her if she is still there the day after Christmas.
She is no longer there, she is here.
Justin knocked on my door and said that my Christmas present couldn't wait. I went outside, and this is what he handed me: 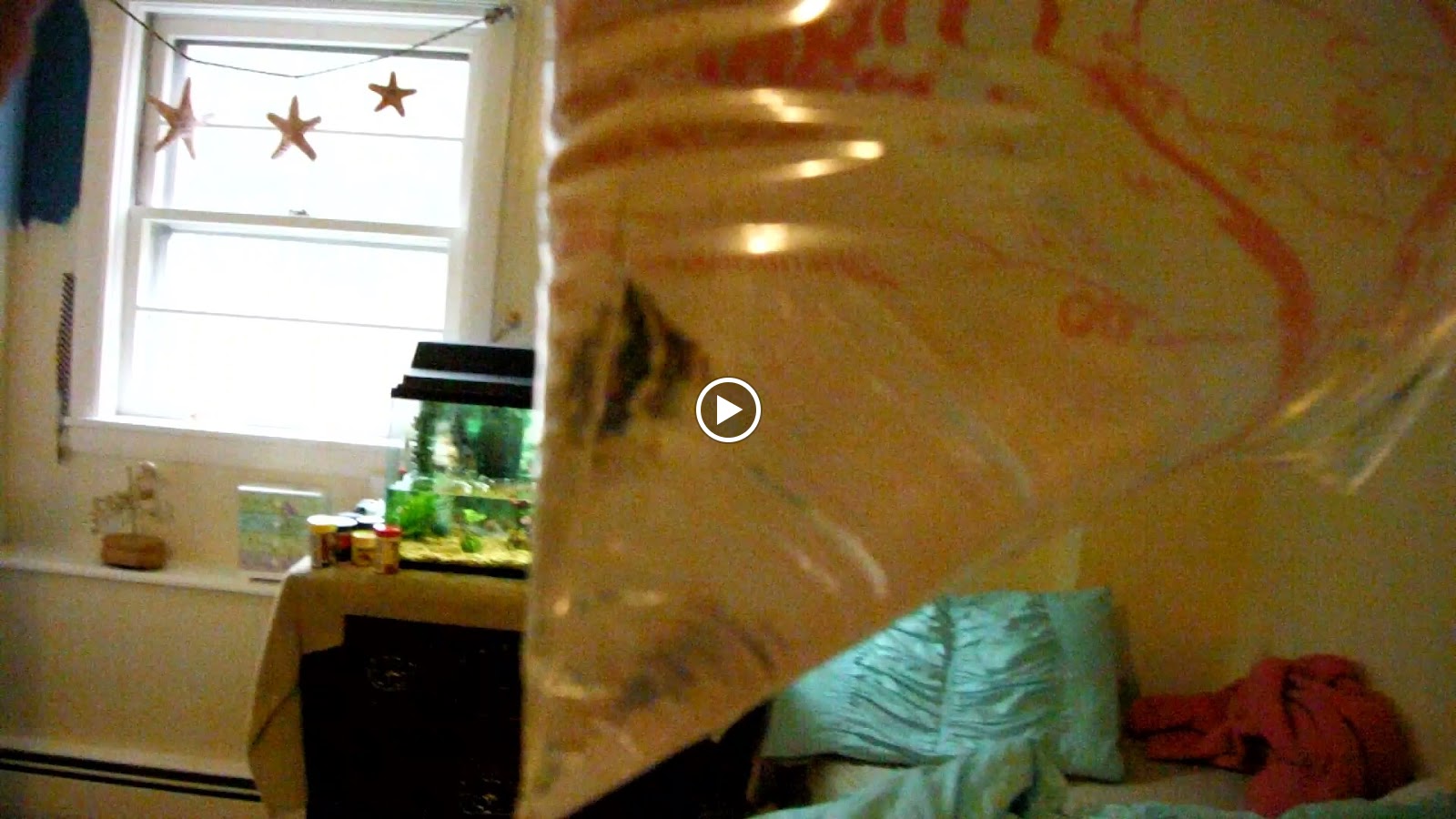 Out of all the angel fish they have there, he somehow picked the right one, not knowing which one she was.
I wasted no time before acclimating her to her new home. 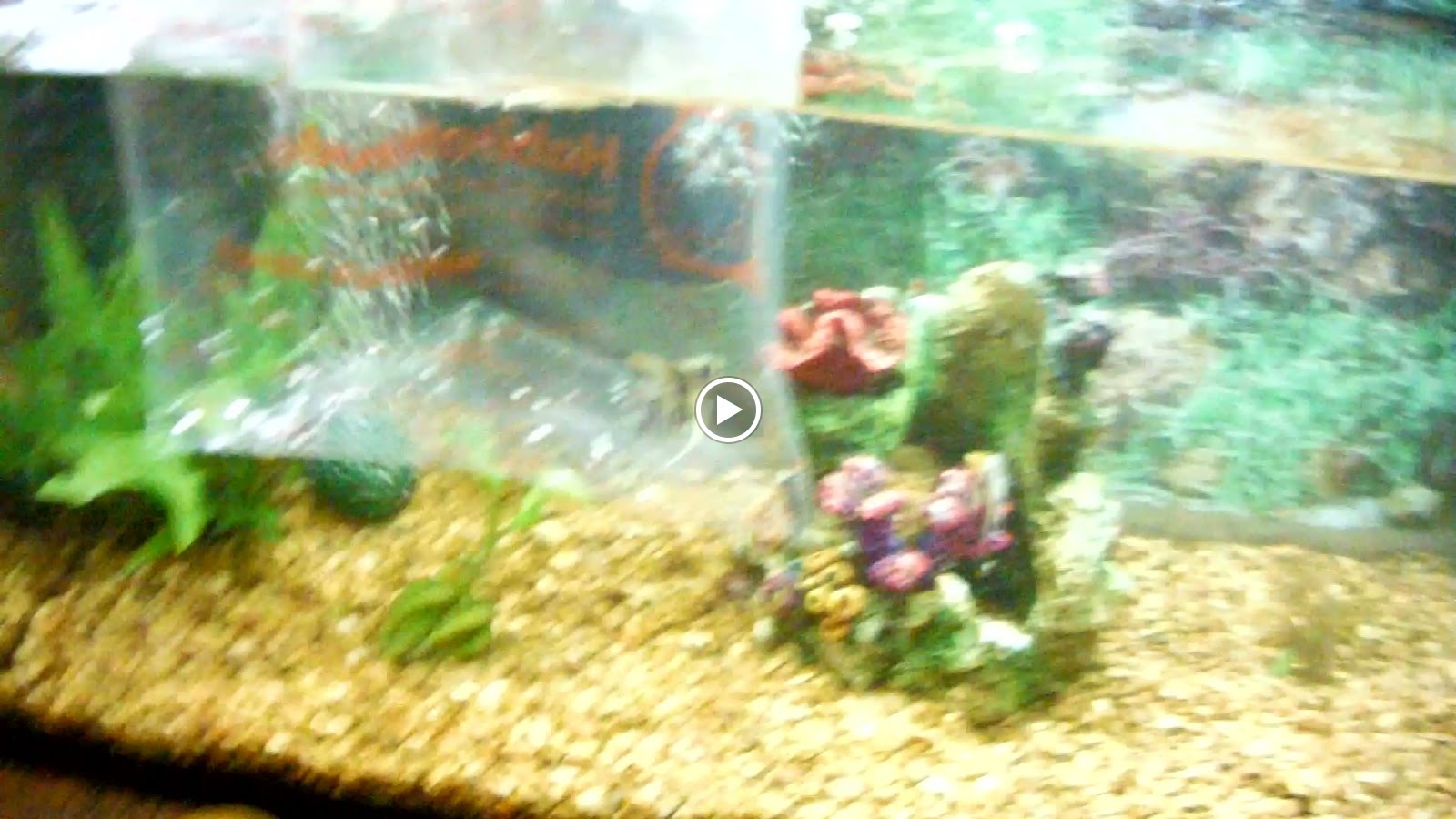 Her being released:
Posted by Unknown at 11:23 AM No comments:

Buddy's first vacuuming since I got him!

I am on my pc now, so i can upload Pictures.
I just vacuumed out my aquarium, first time since I got Buddy.
I didn't vacuum it in a while because i didn't have a bucket. It was so bad, I still have some waste in there, but not much. I am going to vacuum it next week, and then I am going to get a bunch of new plants, to the point were I might not even need to vacuum the aquarium anymore. I really like the look of heavily planted aquariums, and i think my fish, esp Buddy, would really enjoy one.
Now for some pics!! 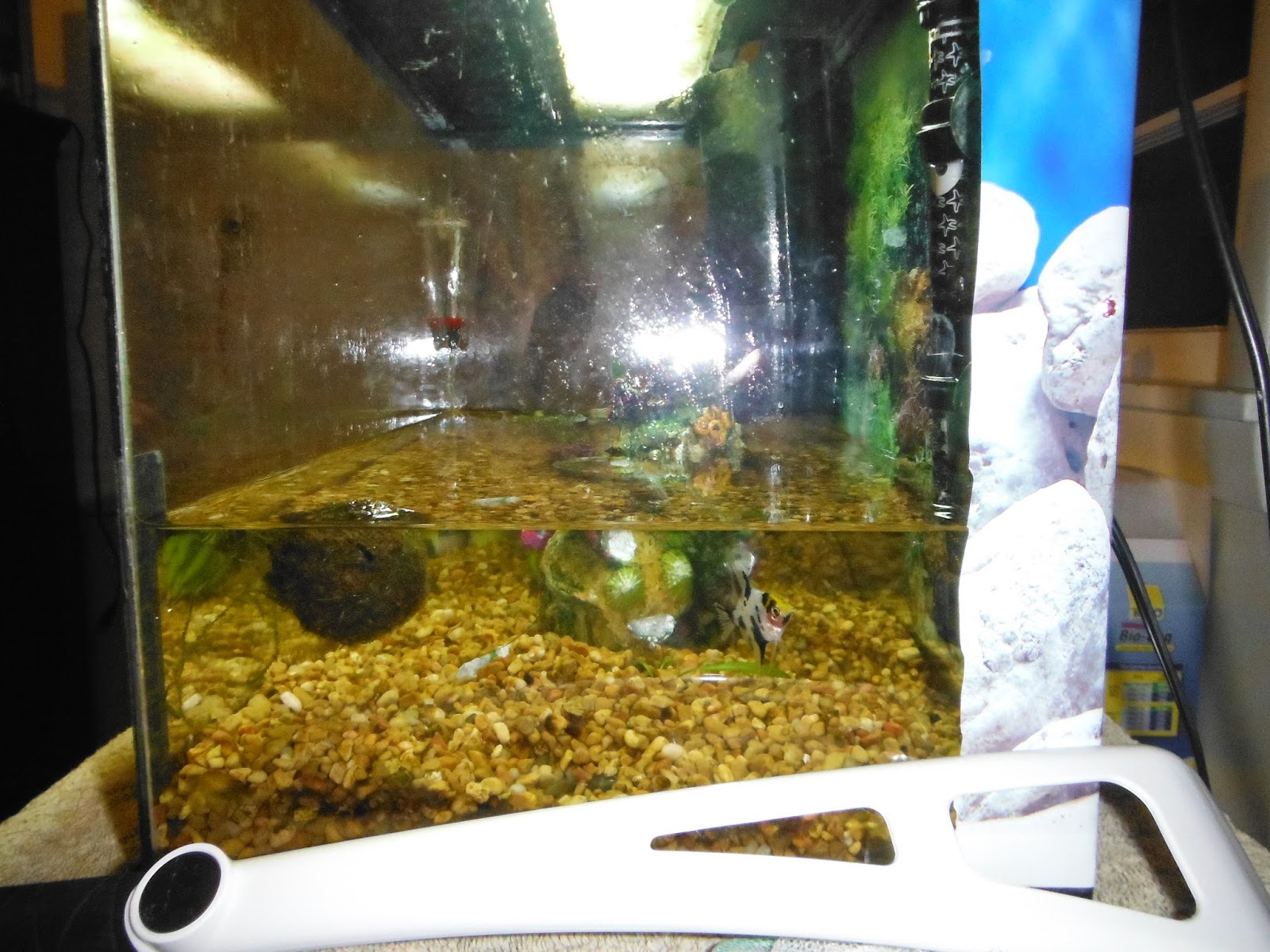 I took this picture on my camera, and when I was uploading it, I found this old video i took to show you guys my new pets at the time being released into the 10 gallon after being floated. 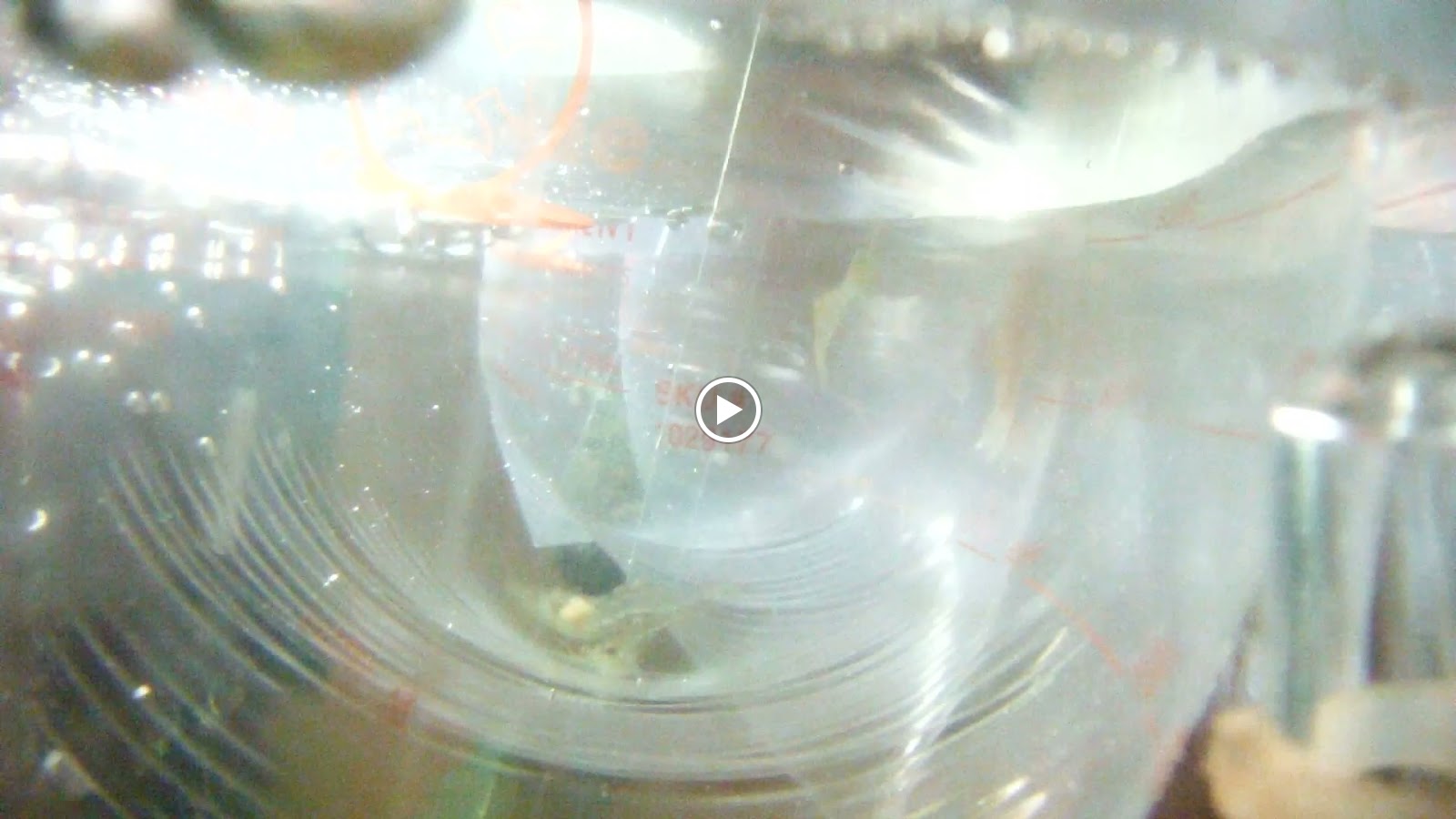 The animals I got that day were one emerald green cory cat fish, 1 albino pleco, and 4 ghost shrimp. One of the ghost shrimp died, I still have the other 3. And Now I am thinking about getting more..... I got to go research some stuff for my aquarium on my tablet in bed until I get tired enough to fall asleep.
Until next time, Happy betta keeping!!!
Posted by Unknown at 1:26 AM No comments:

I can't really upload pictures and vids with this app. I am sorry guys 😭😭😭😭
I just took the time to quickly look through some of my old posts, and I realized how long ago my last post from before getting Buddy was, so I decided to give a quick update;
Right now my aquarium consists of 1 betta, 3 ghost shrimp, 1 albino pleco, 1 panda Cory cat fish, 1 emberald green Cory cat fish, and an angel fish. My aquarium doest have that many plants, but I plan on getting more. I want many plants and maybe some more fish, right now my tank seems empty. Also I plan on getting a gentler air pump for my fish.

I am sorry about that.

the update on my 10 gallon planted community betta fish tank:

i had a nitrates problem. it is better now, though, and i have been vacuuming my aquarium every other week (i can't vacuum it every week because it will cause problems with my plants and panda cory cat fish.)

most of my fish died. I only have 3 left:
-sky
-panda (panda cory cat fish)
-1 oversized neon tetra

introducing a tank mate to your betta fish

This is how I do it:
If you are going to float the fish, do so now. I have another method of acclimating my fish. Right now is when I will be putting them in my .10 gallon tank, and slowly and carefully taking out most of the water so they just have enough to survive. I put it next to my 10 gallon. I then take my spare air pump tube, and I put one end in my 10 gallon aquarium, suck on the other end (careful not to get the aquarium water in your mouth, but try not to have any air left in the tube,) and then put your thumb on the end that is in your mouth so air can't get in. This causes the "suction effect." Put that end of the tube under the water of the .10 gal, and then take your thumb off. You can completely let go, but make sure the tube doesn't come out of the water.
As some of the water is being put into the smaller tank, feed your new fish along with the ones you already had. Turn off your aquarium light while your fish eats.
When the small tank is filled with good aquarium water, take out the tube. Make sure no water is left in it and store it. Wait a little longer before slowly putting fish and water from .10 gallon aquarium into 10 gallon, and when you have put the fish in there, clean up, and watch fish for 30 minutes to make sure there are no signs of aggression, and keep checking on fish for a couple of hours afterwards.

I will try to make a video tutorial, but the lighting in my room is terrible, so I don't know if I will be able to.

I wanted to share this picture. The red and white betta fish reminds me of peppermint and christmas. 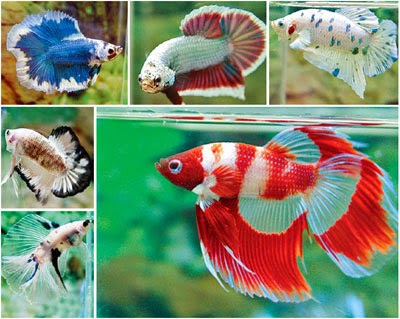 I am stocking up on pictures for Betta Fish Awareness Day, mark June 21st on your betta fish calendars. I am making printable leaflets that will be available on this blog only. Make sure to get loud and make animal rights matter! You can help by printing a few leaflets, handing them out, or hanging them up in a public place where a lot of people see it!

Posted by Unknown at 1:27 PM No comments:

So, I wasn't able to catch Hot Stuff in my 10 gallon, so I am breeding Bella with Lucky instead. They are in the breeding tank now. Mean while, my other neon tetras are stressed and paling because there are only 4 left. They look confused. Neon tetras are schooling fish, so you need atleast 5, although they do best with 7 or more. My neon tetras will be released into the tank tomorrow night. I set up the breeding tank to have specific qualities that will make my neon tetras breed. 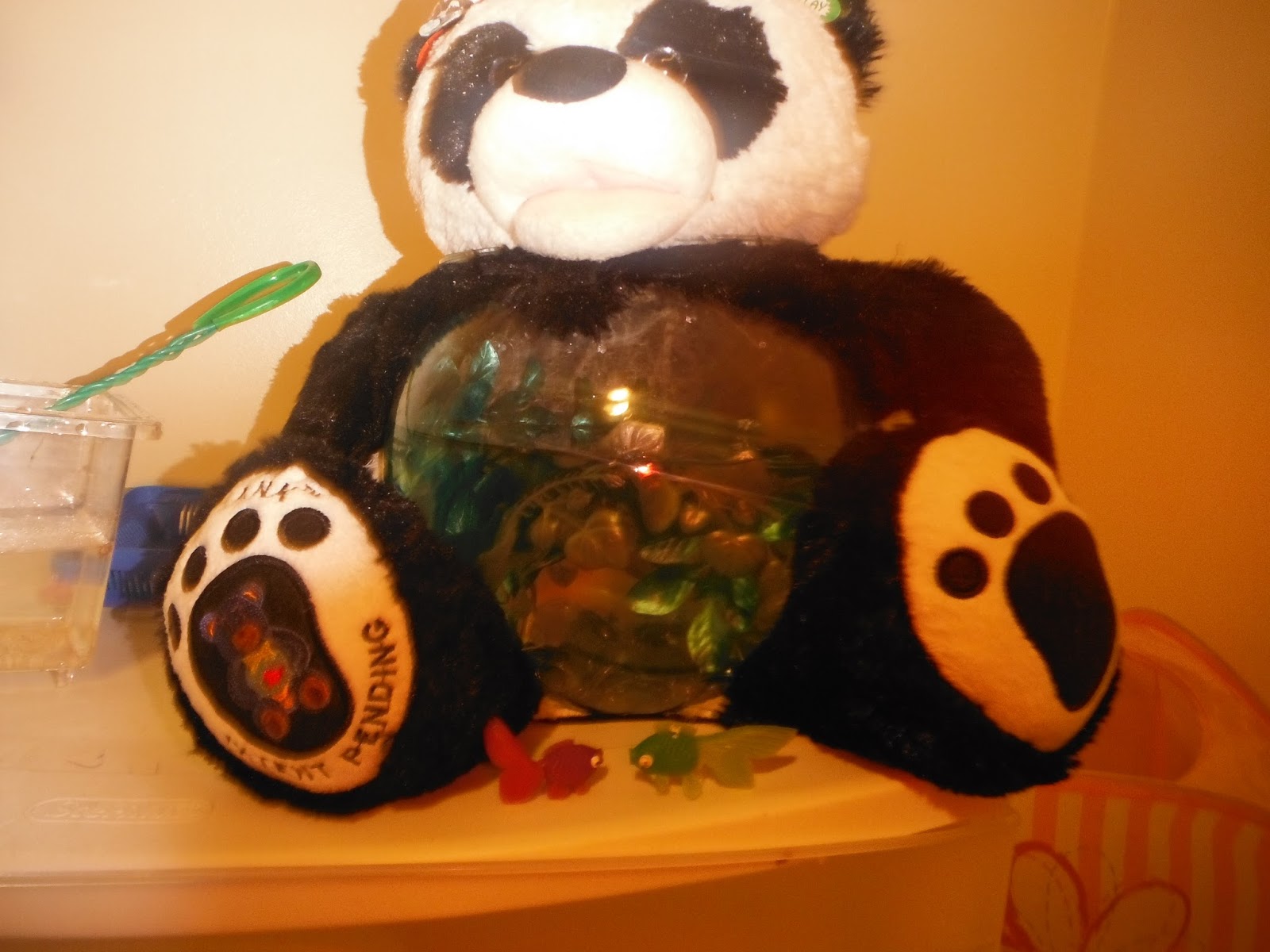 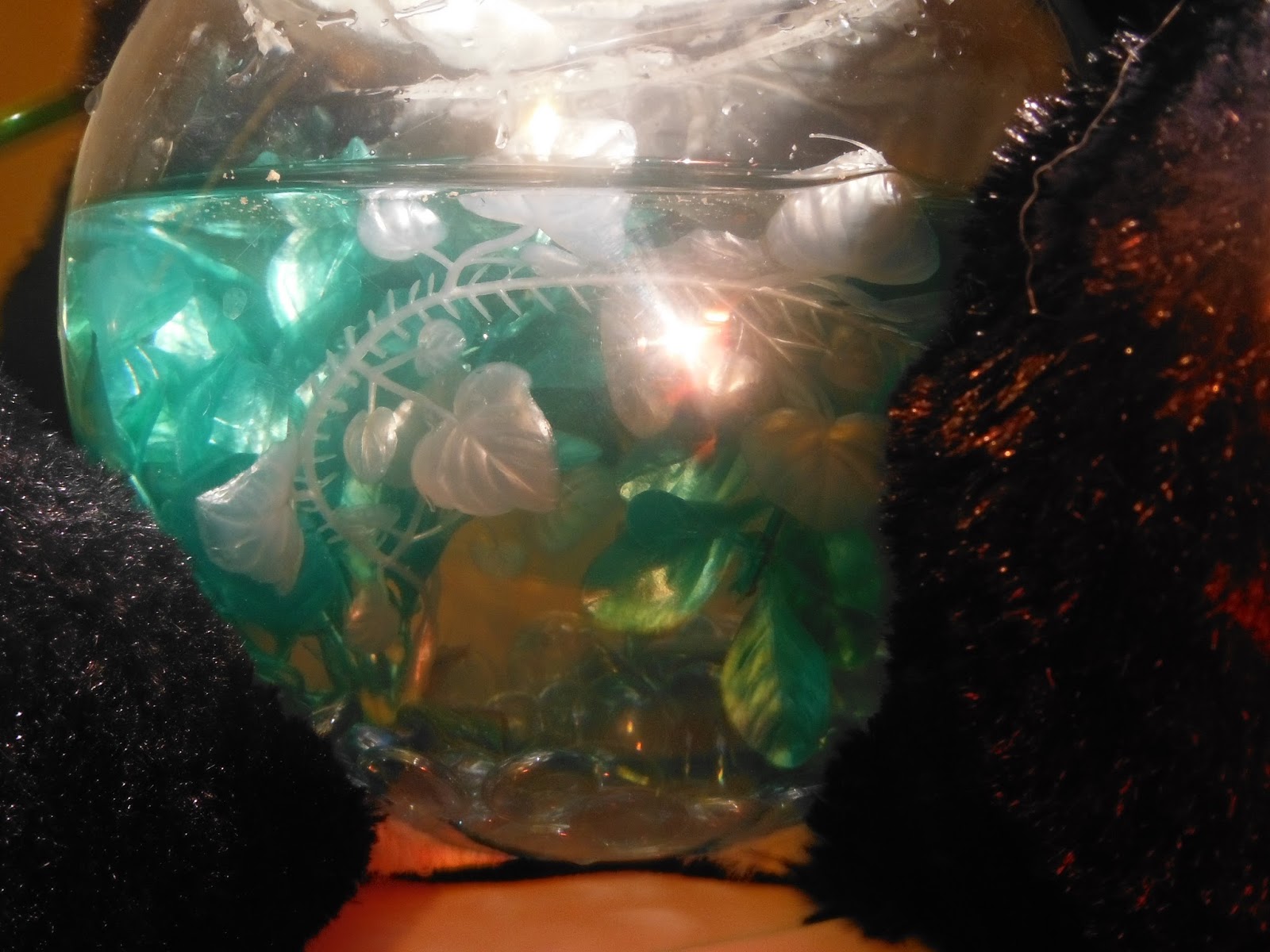 Posted by Unknown at 7:52 PM No comments:

I have an update on my cleaning crew:
Because Mystery died, I got Patch, a Black Mystery Snail.
I also got two more small ghost shrimp because I cant find Casper and I do not know what happened to him. 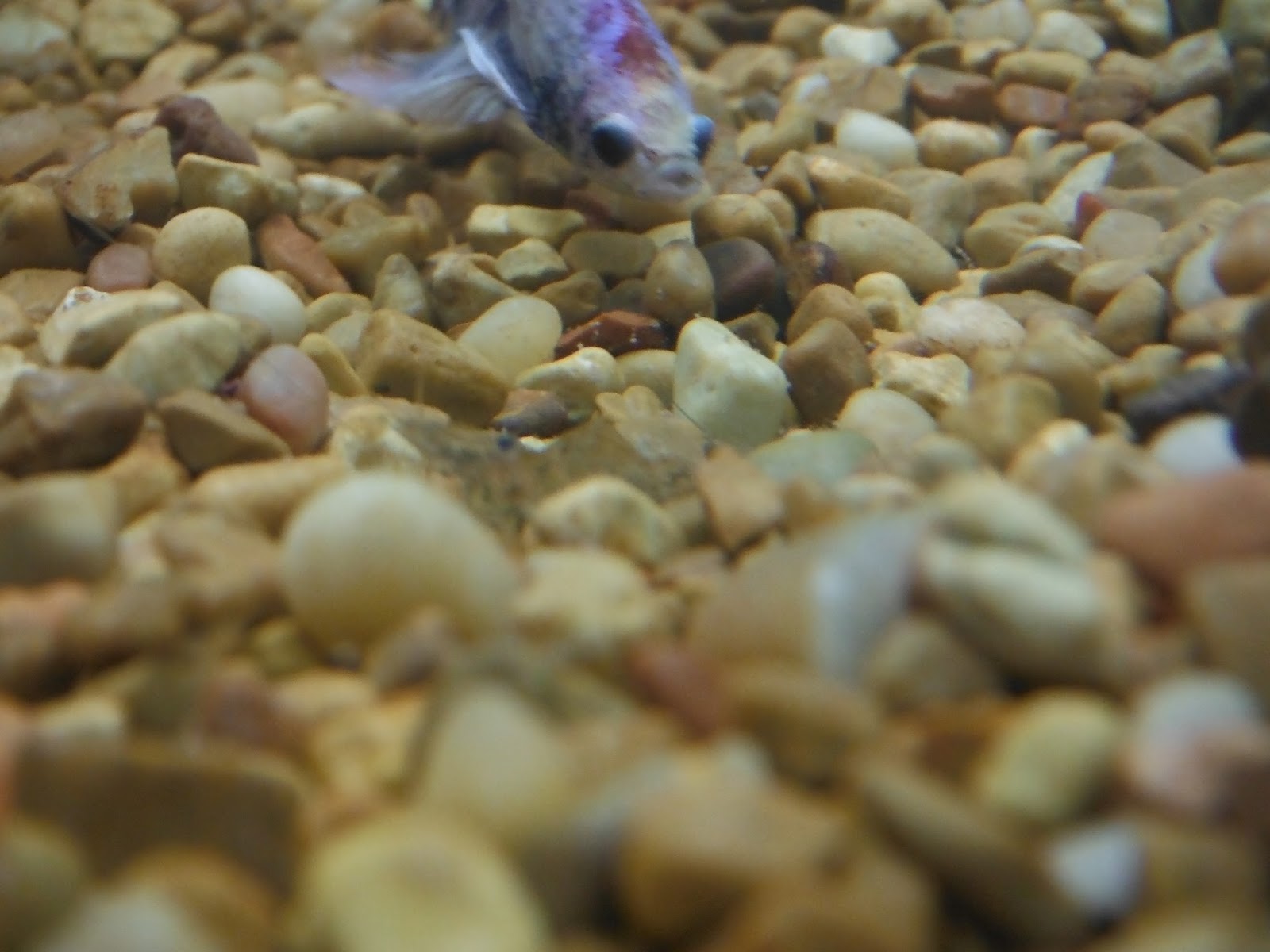 Also, I am planning on breeding Hot Stuff and Bella.
Bella is the female, but in this photo Hot Stuff looks like a female, too. I hope he isnt or I will have to name her Rosie and choose another male.
I am looking for a specific gene: to have a really bright stripe.
Do you think I can do it?
Also, I have one red one and an orange one for a reason:
I want to see if the fry will turn out to be pale red, red, orange, or some red some orange. 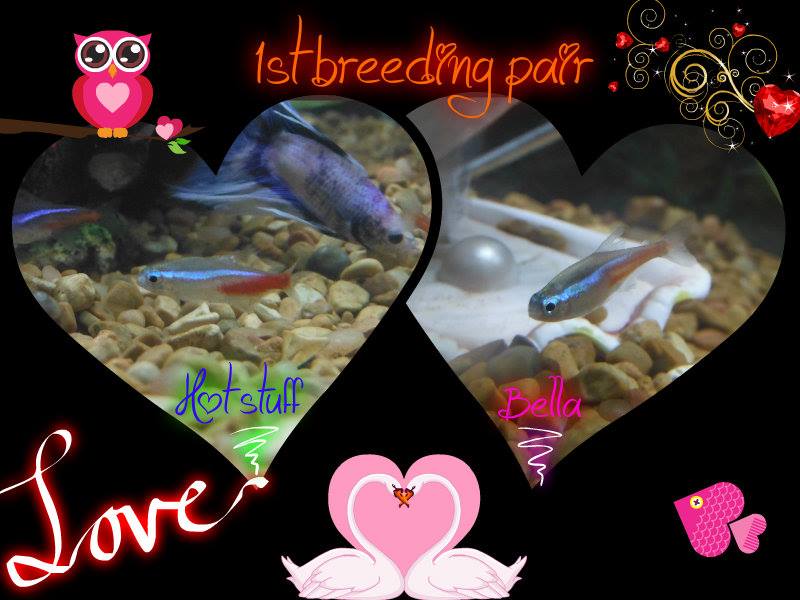 My good friend, Crystal, might be interested in keeping some fry.
I will keep you posted on this topic.
Until then, Happy Betta Keeping!
Jessica